When you listen to a song and see the images play in front of your mind’s eye, one can argue that the nature of those images are solely influenced by pop-culture, or the environment one finds themselves in. This is true, the brain can only use the resources that it’s been given, but what is the driving force behind it? What cuts and pastes the random clips and phrases together?

Perhaps there are deeper knowings and meanings that humans could never understand past the physical examples it has at its disposal. What if the mind had no way to communicate its knowledge to us other than through the things it has heard, seen, smelled, tasted, and felt? This is, as we all know it, the underpinning of symbology.

I’ve recently come to ask myself, what if there is something more to know far beyond the images we’re given in this life and the only way to see their truth is through close examination, and an inward meditative journey investigating them? What I’ve laid out is a complicated way to speculate the validity and deeper meaning of symbols. Just to be clear, I’m referring to any and all symbols we might encounter, such as dream interpretation, ancient hieroglyphics, or hallucinations from psychedelics just to name a few.

This image comes from the book Thin Slices of Anxiety: Observations and Advice To Ease a Worried Mind by Catherine Lepage. It is originally used to illustrate the difference between the field of vision for a normal vs. anxious person. However, I like to associate it with the difference between the focus of a mind that has an external gaze, and mind that has turned itself inward

I’ve always speculated that all there is to know is already within us. This belief was supported when I took a philosophy class and learned about conversations between Socrates and Meno. Amongst many ideas discussed in these works, one of which posses the possibility that everything we come to learn in society is information we’re actually remembering, not coming across for the first time. This is called anamnesis.

While the western man philosophizes the possibilities of inner knowing, there have been many indigenous peoples throughout history to venture into this inward expedition through the use of native plants. Recently I’ve come upon an esoteric anthropology book called The Cosmic Serpent: DNA and the Origins of Knowledge by Jeremy Nary. This gem is written by a scholar wanting to understand the indigenous peoples of Peru, where he spent years researching their ecology and society. 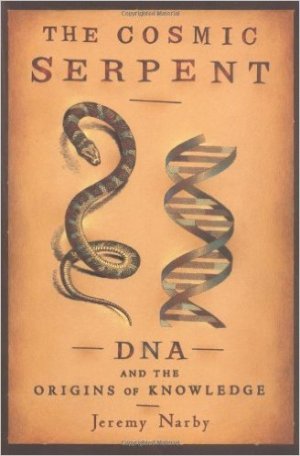 This book takes you through his hypothesis that the use of psychoactive plants by shamans may be an avenue to information at a molecular level. Although it sounds far reaching, the evidence he presents is remarkable. In this book, Nary gives many examples in which the knowledge passed down over generations by shamans has an astounding similarity to the knowledge of 21st century biology. He explains how shamans have extensive knowledge about plants and their effects on the body, many of which that seemed too specific to be discovered on accident. He also shows how the visions experienced by both modern and ancient peoples has remarkable similarities to the microscopic imagery of our cells and DNA. Do we have knowledge of the universe waiting to be unlocked inside ourselves? Maybe we do not need to send manufactured probes out into the reaches of space to learn more about the universe. Perhaps the real journey is the one sent inward to uncover what is not readily seen. It makes more sense than most realize, as we are made up of everything we see around us, and so to know ourselves on a molecular level is to know the physical universe.

Although I don’t have an extensively thought out conclusion drawn from this information, it’s worth pondering and I felt compelled to share it with my readers and leave it up to them to take what they want from it. It is ultimately through this lens that I began to fully grasp the possibility that we have more information inside us, subconsciously and within our on molecular makeup, that any of us will ever know or understand on a human level. How could I possibly explain the magnitude of that in a mere blog post?

Thank you Marci Brockmann, Joe Milians, and Jen Dougherty for becoming a patron for Metanoia!

If you like my work and would like to support my endeavors, please visit my Patreon page and explore what services I have to offer.